Posted by LiveFoodTravel on February 16, 2018

Happy Chinese New Year!  It is the Year of the Dog!!

1 The festival date changes every year.

This is because it follows the lunar calendar, based on the movement of the moon. Usually, it falls on a day between mid-January and mid-February. This year Chinese New Year falls on February 16.

2 It is also called Spring Festival.

The festival usually falls after the solar term, Beginning of Spring (Li Chun), and is a festival in the spring, hence the name.

In China, each lunar cycle has 60 years and 12 years is regarded as a small cycle. Each of the 12 years is defined by an animal sign: Rat, Ox, Tiger, Rabbit, Dragon, Snake, Horse, Sheep, Monkey, Rooster, Dog, and Pig.

4 The celebration lasts for 15 days till Lantern Festival.

The peak time of the entire celebration is on Chinese New Year’s Eve and the first day of the lunar new year. The 15th day is called Lantern Festival, marking the end of the celebration.

5 One sixth of the world’s people celebrate it.

It is not only celebrated in Mainland China, but also observed in Hong Kong, Taiwan, Vietnam, Singapore and some other Asian countries as well as Chinatowns around the world.

6 It is the longest public holiday and the whole country is on the move.

Most employees have 7-12 days off the work, and students have one month winter vacation. The 2018 Chinese New Year holiday is from February 15th to 21st.

No matter where they are, people try their best to return home for a family reunion, like westerners attempting to spend Christmas with their families. Meanwhile, some families travel together during the holiday. This makes the world’s largest annual migration, known as the Spring Festival Travel Rush. The total trips made by plane, train, bus and ship can reach nearly 3 billion.

7 Reunion dinner is a ritual.

The reunion dinner on Chinese New Year’s Eve is a big feast to commemorate the past year. This is the most important time to be with families.

After the reunion dinner, families sit together to watch the Spring Festival Gala, while chatting. As the most watched TV program, the gala collects various well-selected performances, targeting audiences of different generations.

8 Then comes the annual largest usage of fireworks on the planet.

Fireworks are an indispensable part of the celebration to liven up the air of Spring Festival. All families set off fireworks to celebrate the festival. The biggest firework show is on Lunar New Year’s Eve.

9 The celebration decorations are mostly in red.

Houses are decorated with red couplets, red lanterns, and red paper cuttings; city streets are lit up by red lanterns; and numerous people are dressed in red. This is because red in Chinese culture is the symbol of happiness, wealth and prosperity, and can ward off evil spirits and bring good luck. These red decorations are to the festival what Christmas trees are to Christmas.

10 “Guo Nian Hao” is one of the most used Chinese New Year greetings.

This is like the westerners saying “Merry Christmas” to each other on Christmas Day. It means “Happy New Year”.

Why is the celebration also called “Guo Nian”? “Nian”is the Chinese word for year. In folk culture, the Spring Festival celebration is also called “Guo Nian” (meaning “passing a year”). In a Chinese New Year story, “Nian” is a fierce and cruel monster which eats livestock and kids, but it is scared of red color and cracker sound. Therefore, people use red decorations and fireworks to drive away “Nian”. 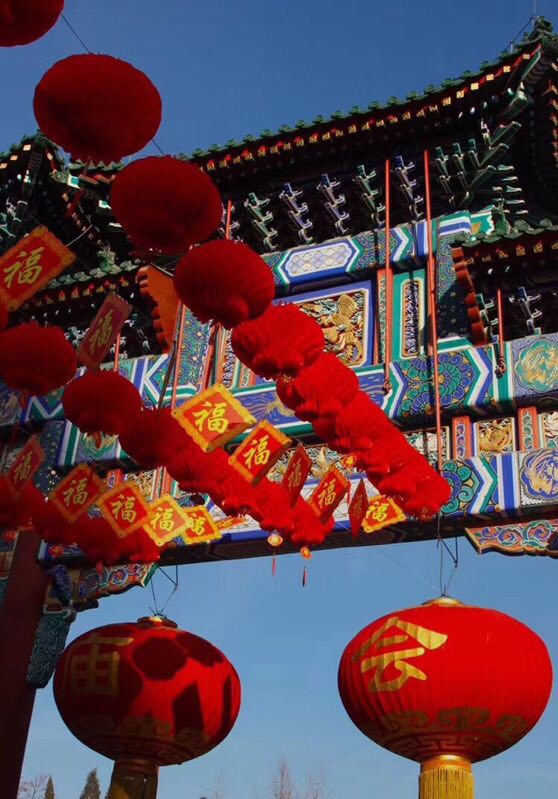 Posted under Food,Live,Travel
Comments Off on Gong Xi Fa Cai!!